Caveat: The content and views expressed in this excerpt were mostly handed down, interrogated, and researched while the rest represent the views of the author(s). This piece is also shared from a work in press and progress.

ACHI I grew up in Achi, Elugwu Akwu community to be precise. I was born a few years after the war in the late 70s. We heard tales of the war, and some telltale aura of the carnage could still be seen around the communities. Bullet shells . Human remains. Abandoned military fatigues. Rifle carcasses. Unexploded mines. Debris of explosives. Damaged or burnt structures. Most especially, despondent and scared populations.The people were picking their pieces, starting all over after losing all to the war. My father was a former Biafra soldier. He relocated his family back to the village following the demise of his dear mother Ụkaọgọ Cecilia who died of what we could now say was diabetes. My father was to suffer and die of same disease many years later.

Achi was a sleepy, agrarian, green, peaceful community were everyone knew everyone, and we drank from one cup. We loved to sing and dance. We loved our masquerades and our different cultural dances. Food was scarce especially protein, there was acute shortage following the war. We ate mostly grated cassava meals in various forms: garri, akpụ, and abacha locally known as “jigbọ” was always the appetizer but could serve as a meal when there is severe lack. We also ate ‘nri ede’ (pounded cocoyam meal). Our main snack was Okpa. Those days, everybody was everybody’s child and every parent was every child’s parent, so there were unlimited adults lining up to chastise or punish an errant child. School was popular but many people never went beyond primary schools due to lack of funding (judging from the socio-economic barometer of my own village at that point in time). College education was elitist. Most boys would be sent to learn a trade after primary education while the girls would get married.

As a child, there was massive poverty around me but we never knew it as poverty then. My parents were of decent economic status and tried to provide extras for us. At least we ate meat, fish, and rice which was an exotic food. We killed goat for meat during Xmas. We didn’t go to very far away farm lands like most other kids. But instead of feeling privileged we rather felt restrained. As kids we saw the suffering of other kids as adventure. I used to try to join them to cultivate, or make baskets for sale, or clear farm lands for money . When my mother stopped me I would cry. I thought she was being mean to me! And she would punish me extra whenever I get involved in a fight with other kids. My mother hated any kind of disputes, she is the quiet and reserved type of temperament. So she would blame me for going to where the dispute emanated from in the first instance, she would argue that if I had stayed home I would never have been involved in any fights. How could I just stay home when it’s so much fun out there? Soccer, hunting birds, and rodents, sweeping village play grounds, swimming in the springs etc. I was however a very great pupil. First position was natural for me. So, even if I was not particularly strong physically, I was popular among my peers cause I was a champion in the classroom.

GOVERNANCE AND STRUCTURE: Growing up I witnessed the vestiges of what appeared to be the governance structures and systems in my immediate community, and Achi in general. Leadership and leadership recruitment was highly democratized and transparent. In those days in the 70s , “chairman“ of Ụmụnna had become a practice. I believe this western styled leadership structure whereby a committee is elected after every few years was introduced during the indirect rule era in Igbo Land, and popularised during the organization of Igbo land into a homogeneous single-identity by the early scholars led by the likes of Nnamdi Azikiwe. The creation of Igbo Unions led to the establishment of similar structures down the line. While this marked a bold leap into modernity, it however, highly politicized leadership in our clime. Elective democracy is easily influenced and diluted by rudimentary sentiments that diminish quality and capacity as the core qualities in leadership recruitment while amplifying the inconsequentials such as rotation, affluence, exuberance, etc.

Originally, a leader is groomed and nurtured by natural interactions and participation in the communal activities. We had a consensus based governance system whereby the oldest man was the rallying point of any clan rather than a figure head. Thus, authority emanated from him and diffused to different structures in a cryptic yet transparent manner.

For instance, a youth leader would naturally emerge as the leader of his peers by way of his disposition and attitude without any elections, these attributes would naturally gravitate his peers towards his persona and eventually he becomes a rallying point of his peers without any elections or even pronouncements that he had become their leader. He would then become their spokesperson, anchor of conflict resolutions, and initiator or propellant of ideas and projects by the group. This system made sure that the so called leader did not enjoy a rigid authority because it was never given to him rather permitted of him. In the unlikely event where the fellow began to underperform or disappoint, that consent would also gradually be withdrawn by way of displayed disloyalty, voiced disloyalty, and resistance to his influence. And loyalty would naturally gravitate towards another who had shown enough fortitude to emerge as the next leader of that group.There were also multiple interest groups that functioned almost autonomously but with converging sphere of activities and impact on the clan. Examples are Ọhọnna, Ọgba, Otu Ụmụokorobia, Otu Ụmụagbọghọbia, Unyemdi, Ụmụ Ada, dance groups , masquerade cults/troupes, Ndi Echichi , Ndị ji nta , Ndi ọkọ Ji etc. Much later, church associations and co-operative societies also emerged. In Elugwu Akwụ community particularly, there was no central governing body for the community so to say until as recent as 1983. During the era of the Indirect Rule introduced by the colonial government, the warrant chief became the center of authority conferred by the colonial regime. He was responsible for administration, arbitration, and tax collection. Their influence and acceptance by the clans were varied and fluctuant. There were a lot of passive resistances against this alien administration systems whose consent or authority never emanated from the people.The people had a chronic distrust against the style of governance which gave so much powers to a single individual and his clique. The system was easily corrupted by a lot of factors. For instance, people recruited as security personnel for the colonial regime were brutish renegades who were rejects of their communities and had a penchant to taking vengeful actions against their own people. So the people did not willingly submit to this authority.

The group was peopled by revered and distinguished honest individuals. Their authority was supreme over such affairs. They had the powers to sanction any masquerade that erred, they decided the scope, and severity of punishment based on the degree of the infractions. They also made sure the sacredness of masquerades was maintained by all members of the community.

Anybody “m luru mmọnwụ“ (desecrates a masquerade) would be dealt with accordingly too. Sometimes threats alone were enough to send adequate messages. Brutality was rare but the fear of its possibility constantly loomed. Fear was the greatest control. The rarity of actual actions even with heightened awareness and propaganda of its implication instilled so much fear. The Ọgba (Age Grade) These were the pivots of community development. An age grade emerged every 3-5 years and was inducted by their immediate predecessors. On their emergence they would take over provision of infrastructure, maintenance of already existing ones, and ensuring security and orderliness. An Age Grade group developed influence and recognition based on the scope of impact and projects they did for the community.

Therefore, each new group tried to outdo their predecessors who were readily at hand to criticize and bamboozle everyone with tales of their accomplishments to spur or shame the other. From memory, the “Ebube Elugwu” Age grade birthed “Ezi okwu bụ ndụ” which in turn birthed “Ikenga” that birthed “Idi na Otu” Age Grades. The groups would prepare and repair washed out roads, makeshift bridges to farm lands, repair roofs for widows , education supports, etc

The Unyemdi : This was/is the association of all the women in a clan, both married and unmarried. They provided control and mentorship for all the women and ensured the welfare of women. They made sure no woman suffered unwarranted abuses in the hands of wayward husbands while also ensuring that their members maintained purity and reverence expected of virtuous women .

The Ụmụ-ada : This is arguably the most influential women group in the community. Ụmụ-ada comprised of all daughters born to the index clan both married abroad or at home or unmarried. Ụmụ-ada, arguably has the greatest influence and perhaps powers. They were reverenced if not feared. The concept of power then was that those with the greatest powers seldom used them. Ụmụ-ada rarely displayed their authority. In fact, it was only when all else have failed, Ụmụ-ada was the last resort to step in and resolve difficult situations. Nobody ever dared or stood in the way of Ụmụ-ada. This authority came from and was supremely enforced by the community.

ACHI NATION: Before encounter with the colonizers, Igbo was not necessarily a homogeneous single entity or even nation . There were clan-nation groups who shared same cultures, same dialects, deities, etc. These clans would form themselves into independent nations that existed on their own with little interactions with other similar nations a few miles from them. The environment was mostly covered by thick woods and forests that formed fortresses around the nation making movement and exploration extremely difficult. Only hunting and very rarely wars would make people of one clan to venture far away from their abode. Even marriages were mostly within clans.

Ozo Ginger Ibeneme II is practicing medical doctor with close to a decade of experience , a social justice advocate and Igbo culture and traditions enthusiast.He holds the titles Ozo Elengum Orio , Ikirikpom Inyikiriputu Na Achi and Omenikoro Akwunubi He is the Crown Prince and Spokesperson of The Rock Palace Akwunubi and serves as the Secretary General, Prestigious Nze Na Ozo Society of Achi Clan. 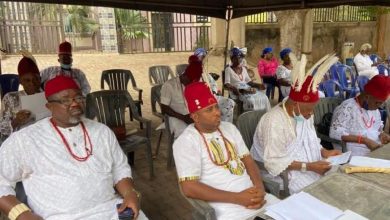