THE annual mathematics competition tagged: The Ultimate Mathematics Ambassadors, TUMA, 2018 for primary five and six pupils of both private and public schools within Lagos and Ogun states, organised by the Ambassadors Schools, Ota, Ogun State, has produced its winners.

In an award ceremony held weekend at The Ambassadors Schools’ Hall, Ota, Renfred Ize Alonge, a 9-year-old pupil of Universal Primary School, Ota emerged as the overall champion scoring 86 per cent above other contestants comprising participants from over 300 schools. 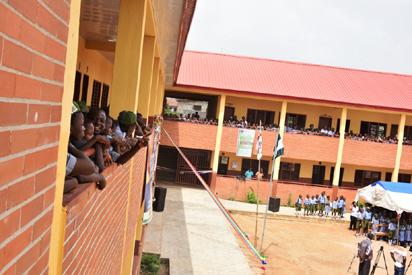 Other winners are Oganla Faizal Oluwatobi from Tomobid Primary School, Ikeja in the second position with 85.3 per cent while Oboegbulam Adanna Jesicca of Dr. Soyemi Memorial Schools, Festac Town, came third. They were rewarded with N150, 000 and N100,000 cash respectively with other prizes for their schools and teachers.

Top 20 best winners were equally rewarded with cash prize of N30,000 for 4th to 10th positions, while 11th – 20th positions got N15,000 alongside certificate of participation. Some of the participating schools which had featured consistently in the past editions were also rewarded.

The TUMA award in its 6th edition, is an initiative of The Ambassadors Schools, Ota aimed at giving back to society as their core corporate social responsibility project. The competition targeted at primary pupils within Lagos and Ogun states is based on the need to discover, encourage and challenge mathematically-gifted learners in Nigeria.

According to the Chairman, Ambassadors Schools, Mr. Yomi Osewa: “We are doing this to stimulate the interest of pupils in the study of mathematics, thereby reducing or eliminating  math phobia amongst pupils in our country.

“Having done this consistently for six years, I am glad that many schools have reckoned with our objective and have participated. That’s why over 300 schools participated with more showing interest.”

She also emphasized that mathematics is one simple and vital subject that people in general cannot do without.

According to her, “I am very happy with what Ambassadors Schools is doing to promote the study of mathematics which is not only a component in science but cut across all other subjects. I noticed with keen interest that virtually all the children that passed out of this school (Ambassador) are mathematicians.

“Everything we do in life on daily bases revolves around mathematics including buying and selling. The technology behind every gadget we use, such as toys, PlayStation, mobile phones, computer are mathematically imbued.”

Speaking further, she said, “There’s no way anyone can run away from mathematics because whatever profession you find yourself, you will always meet mathematics. Mathematics is methodical, systematic, orderly and logical. And without embracing this basic analogy, one will not know how to organise his or herself in life.”

Dr. Sheila admonished the students on how to overcome the stigma and build interest in mathematics. She stressed that self-determination, focus and regular practice are necessary.

“Regular class attendance and asking questions will also help to boost your morale. There’s also need for parents to encourage their wards in appreciating and building interest in mathematics. You can’t rule out the fact that mathematics is the simplest subject to learn only when you develop interest and practice it diligently It will also help and make you stand out in every profession you may find yourself in life.” She added.