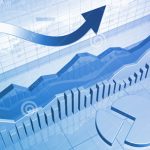 After a topsy-turvy in the first two trading sessions of the week, Nigerian equities broke into a major rally on Wednesday with a gain of N370 billion as investors scrambled for equities of large-cap stocks. Benchmark index at the Nigerian Stock Exchange (NSE) indicated average day-on-day gain of 2.44 per cent, raising average year-to-date return to 13.30 per cent.

Aggregate market value of all quoted equities at the Exchange rose by 2.44 per cent of N370 billion from its opening value of N15.180 trillion to close at N15.550 trillion. The All Share Index (ASI)-the value-based common index that tracks share prices at the Exchange, also rallied by 2.44 per cent to another threshold at 43,330.54 points as against its opening index of 42,299.56 points.

With 31 advancers to 23 decliners, the positive market situation was driven by gains by large-cap stocks as well as widespread buy sentiments across the sectors. All sectoral indices closed positive as investors engaged in last-minute portfolio realignment for the month-end.

“Current trading pattern is reflective of the fact that investors are increasingly taking position in fundamentally sound dividend paying stocks as earnings begin to trickle in, hence we expect market performance to remain largely positive in the short term,” Afrinvest Securities stated.

Analysts were almost unanimous on the positive outlook for quoted equities.

“As we anticipate corporate earnings releases, we look to sustained gains in the equities market, amidst still-positive macroeconomic fundamentals,” Cordros Capital stated in post-trading note.

Analysts at FSDH Securities noted that market activity and investor sentiments were strengthened on Wednesday, pointing out that “this trend is likely to be sustained in coming sessions as investors continue to hunt for bargains in perceived undervalued stocks”.

RipplesNigeria… without borders, without fears